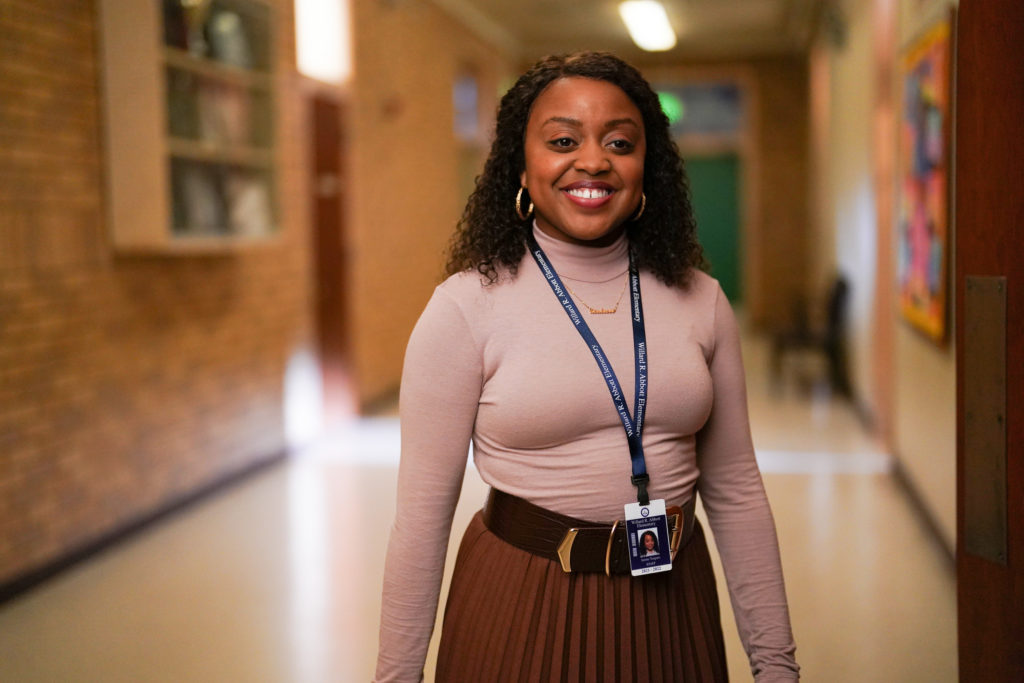 Quinta Brunson—creator, writer and star of ABC’s Abbott Elementary—has written something of an addiction manual in her 2021 memoir, She Memes Well. In all of Brunson’s work, she reckons to have “represented my generation in a way that I had yet to see on network TV.”

Growing up in segregated West Philadelphia, Brunson was drawn to comedy as a small girl. The youngest child in a large family, she found that she could reduce her siblings to tears by parading around using a line from Martin — “Where’s Ofra? Where’s Ofra?” Wanting to reproduce this reaction, she “curated a mental collection of laugh points. If something made me laugh, or made others laugh, I noted it. Slowly I began building up characters and stories in my head, ones that I knew would get people laughing. It felt good to be loved, but it felt better to get a laugh.”

Years later, she went to LA to become a comic actress. But she didn’t really fit any mold: not a traditional (white) beauty, her humor and persona were idiosyncratic.

So she started meming. Hence the title of her 2021 memoir: She Memes Well.  This involved producing her own short Instagram videos, with a roommate “filming” the scenarios on an iPhone.

She hit it big with the “Girl Who Has Never Been on a Nice Date” series. In it, Brunson plays a girl on a date who is overly impressed when the guy buys the tickets and gets not just one, but two treats. After each move he makes her character looks in the camera, wide eyed, and says, “He got money!”

There are no jokes in the meme. It’s all about attitude, and Brunson’s sincerity and naïveté, and the different world that her character occupies from the world of ordinary (white) observers.

Brunson then became hot. BuzzFeed developed a content arm, Buzzfeed Video, and hired her to develop shows. But she still felt like her vision wasn’t being realized. So she quit to develop her own material. ABC then picked up her Abbott Elementary, with her writing, producing and starring in the series.

Brunson combines an appreciation for mainstream cultural nuance with her own Black experience, packaged for a new generation in the new media forms that her generation has taken up (she’s 32).

Brunson’s success belies what might be considered a traumatic upbringing. Her relationship with her mother — a stern Jehovah’s Witness — was a constant struggle, one that involved her presenting herself to her mother in an inauthentic way: “I had to learn how to compartmentalize the things that made me different.”

In the end, Brunson refuses to be bitter towards her mother, whom she reckons has her own life issues to deal with. They talk regularly, just avoiding certain topics— such as sex and drugs. But, fundamentally, Brunson was a “good” — that is a constructive, purposeful —girl. When her mother suspected her of sneaking out to party, she was actually going off to do improv.

Brunson can’t help but realize that, when her mother was criticizing her hoop earrings, she was actually rejecting her daughter more fundamentally. Nonetheless, “though the disconnect was an odd and painful reality to grow up with, I eventually learned her intentions were all love. It was never about the hoop earrings—it was about protecting her baby.”

And you can’t fault a mother for that. At some point in every young adult’s life, it’s crucial to have this breakthrough, to finally see your parents as people instead of robots put on this earth to tell you what to do. They had a life before you, and they’ve learned things from it. They’re healing from things, too.

Meanwhile, it doesn’t seem accidental that in Abbott Elementary Brunson plays a dedicated teacher in West Philly, while her mother actually teaches in West Philadelphia.

Getting Over Love Addiction—with Purpose

Brunson is inexperienced when she finally gets a boyfriend, whom she hides from her parents. When he moves to Chicago and gets a new girlfriend, Brunson is unhinged.

I began to deteriorate. I stopped going to my classes. I stopped eating. I stopped getting out of bed. I would smoke out of a homemade bong made from a Coke bottle and tinfoil and watch the same DVD of Bruce Almighty over and over again, not because I loved the movie (though I did), but because I couldn’t pick myself up out of the bed to change the disc to a different one. I dropped to eighty pounds and lost my academic good standing at Temple. It was all bad.

It took me a year to pull through my bout of depression, two years to stop talking to Malik daily, and four years to fully get over him. I didn’t get handed closure; I earned it—second by second, hour by hour, until I was finally able to shut the door on Malik, forgive him for hurting me, and move on.

At twenty-two years old, I was just about fully recovered from Malik. By fully recovered, I mean I’d stopped going to school, became skin-and-bones thin, and had quit dancing, but at least I wasn’t dead inside anymore. Zest for life and a hope for the future returned to my spirit.

Brunson got over her love addiction by finding a job as an Apple “genius” in a suburban mail. She was good at the work and liked the people she worked with. So much so that she picked her supervisor out as a new boyfriend.

And her supervisor was really into Brunson, reckoning that she was “the most beautiful girl in the world.” The problem: Joshua didn’t share her expansive career goals and view of the world. When she wanted to move to LA to try to be a comic actress, he refused to leave Philadelphia.

“It’s what I want. What do you want out of life?” “You.” “Beside me. Anything at all you want besides . . . working at Apple and eating sushi in the same mall where we work?” Joshua sighed. “No, this is it for me, sweetie. This is all I see and all I want.”

Brunson left, and the rest is history. She became engaged again. Only this time, she didn’t lose track of her purpose:

We’re on to my third and final great love. I know what you’re thinking: Quinta, you’re so young, how would you know that this is your final love? First off, I’m not that young (31), I just have good skin and a small body. Second off, I know this love is final because I deemed it so. My third and final great love is . . . comedy. Comedy was—and remains—the one constant through all of my most significant relationships.

And that’s the ultimate solution to love addiction, or addiction of any kind.